The PLA started live drills around Taiwan on Monday, the SCMP reported, as the island’s president received the first US congress delegation since a visit by US House Speaker Nancy Pelosi drew unprecedented military pressure from Beijing two weeks ago.

“This is a resolute counterstrike and solemn deterrence to the consecutive provocations by the US and Taiwan that undermine peace and stability across the Taiwan Strait,” Wu Qian, a spokesman for China’s defence ministry, said. He added that the visit led by Democratic Senator Ed Markey sent the wrong signals to pro-independence forces in Taiwan. Taiwan’s Ministry of National Defense said Monday that it detected 30 Chinese military planes and five warships around Taiwan’s surrounding region.

According to Bloomberg, unlike earlier this month when China conducted live-fire exercises and likely fired ballistic missiles over Taiwan’s main island, Beijing didn’t immediately specify exclusion areas for commercial planes or ships to avoid. Chinese naval vessels and warplanes have regularly breached the US-drawn median line that divides the Taiwan Strait since Pelosi’s arrival on Aug. 2.

In Beijing, foreign ministry spokesman Wang Wenbin said Beijing had repeatedly warned against the trip, which breached the one-China principle and the three joint communiques signed by Washington.  Wang also said the visit “blatantly violates” the country’s “One China” understanding with the US, was a “violation of the sovereignty and territorial integrity of China” and cross-strait reunification was a historic trend that could not be changed.

“China will take resolute and strong measures to defend its national sovereignty and territorial integrity,” Wang said. “The handful of US politicians who have been colluding with Taiwan independent separatist forces and attempting to challenge the One China principle, they are overestimating themselves and are doomed to fail.” 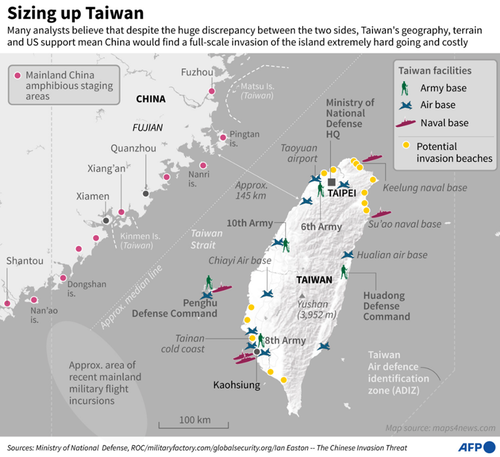