As Twitter does its best to carry water for the regime (Paul Sperry is still suspended for wrongthink), the social media giant announced on Thursday that it will be 'pre-bunking' claims - "to get ahead of misleading narratives," and "to proactively address topics that may be the subject of misinformation," the company said in a blog post.

Over the coming months, we’ll place prompts directly on people’s timelines in the US and in Search when people type related terms, phrases, or hashtags.

The company notably used 'prebunking' during the 2020 election, tagging tweets by former President Trump as 'misinformation' and appending a link where people can "get the facts". 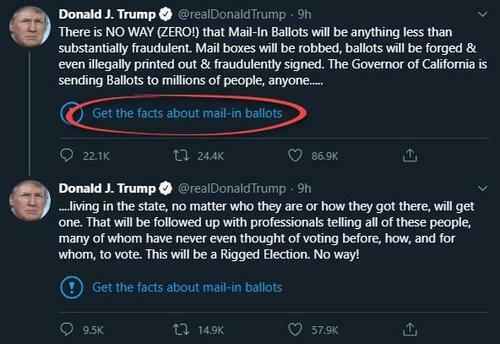 Other changes leading up to midterms include "activating enforcement of our Civic Integrity Policy," which "covers the most common types of harmful misleading information about elections and civic events, such as: claims about how to participate in a civic process like how to vote, misleading content intended to intimidate or dissuade people from participating in the election, and misleading claims intended to undermine public confidence in an election – including false information about the outcome of the election."

When tweets run afoul of their rules, they will be slapped with a misinformation label, and others will be warned against sharing them due to the 'potential for harm.'