Just a few days ago we wrote that "Something Is About To Break" and prompt a capitulation from one or more central banks, which oddly was met with mockery in the comment gallery. Also, a few weeks ago, we said that we are nearing a moment in time when central banks will do QE and rate hikes at the same time.

Finally, for much of the past year we have said it is only a matter of time before the coming market crash and economic collapse forces central banks everywhere, not just in one or two countries, to pivot as the price of economic collapse and tens of millions unemployed is far, far greater than simply shifting the inflation target from 2% to 3%.

And then, just moment ago, we were once again proven right on all three when - with UK 30Y gilt yields having exploded in recent days above 5% in an exponential move that can only be described as the bond market breaking...

... the BOE became the first bank to capitulate on its plans to proceed with QT on Wednesday when the central bank restarted QE in a "temporary and targeted" bond buying operation - which will be as "temporary" as "temporary" inflation was - warning of a "material risk to UK financial stability" if the turmoil in the UK government bond market were to continue. It also raised the prospect of a “tightening of financing conditions and a reduction of the flow of credit to the real economy”, but what it really meant is that QT is over before it even started, and QE is back. 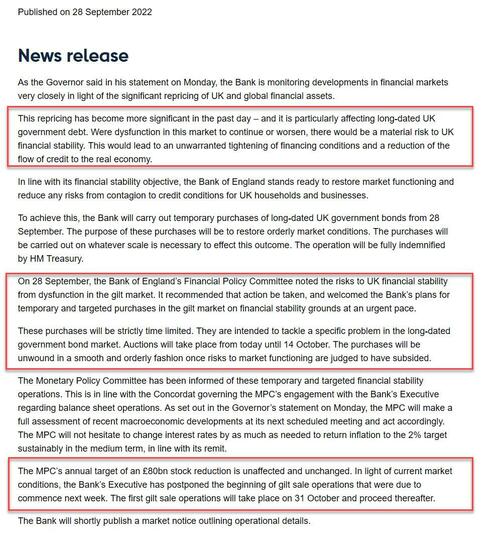 According to the FT, the "break" in the bond market manifested itself in thousands of pension funds have faced urgent demands for additional cash from investment managers in recent days to meet margin calls, after the collapse in UK government bond prices blew a hole in strategies to protect them against inflation and interest-rate risks.

The BoE’s action said its action was designed to restore order. “The Bank will carry out temporary purchases of long-dated UK government bonds from 28 September,” it said. “The purchases will be carried out on whatever scale is necessary to effect this outcome,” it added, saying the Treasury would underwrite any losses.

Spoiler alert: there will be nothing temporary about the return of QE, as the moment the BOE even thinks of ending the bond buying yields will explode right back to where they were. In effect, the BOE just became the first central bank to admit that it is trapped, and the only other option left is to raise inflation targets to 3%, 4% and so on.