With the mainstream media scrambling to keep the fear factor over the Omicron factor pegged to the Max, with much of Europe in the process of locking down amid the 5th covid wave despite cases now clearly declining across most countries... 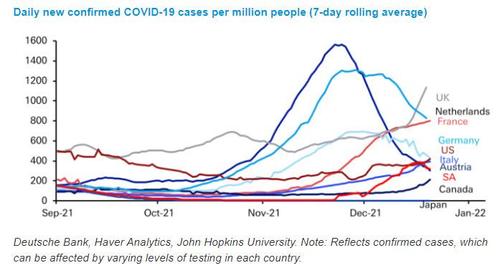 ... while in the US the Biden administration - too scared for now to impose a new round of draconian lockdowns - set to deploy 1,000 military troops to back up hospitals if they face a wave of omicron patients in January and February, Deutsche Bank's Shreyas Gopal finds some actually good news.

Noting that Omicron has spread like wildfire in London, which in turn has made the UK the country with the most cases per million people (as shown in the chart above), the DB strategist asks how does this compare to what was seen in the South African province of Gauteng?  His answer: "plotted on a log scale, and lagging cases by fourteen days gives some hope that the UK's capital city is on a similar path. The overall impact on hospital capacity in the UK remains to be seen, but nevertheless the relationship suggests a peak in cases soon." 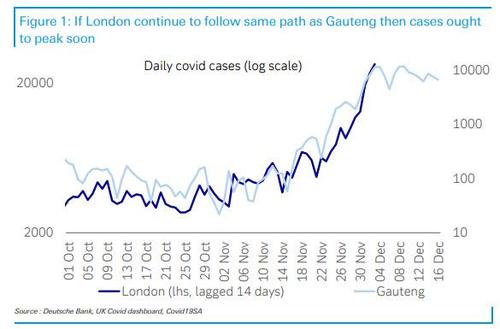 Just to be safe, Gopal also hedges by noting that if "this doesn't materialize then the tentative optimism being drawn from the data from SA may prove short-lived."

Of course, if one ignores the constant drumbeat of panic carried by media headlines around the globe, there is even more reason to be optimistic because no matter how scary the narrative, Omicron - while extremely contagious - remains an "extremely mild" case of covid with virtually no deaths reported as a result.

While recent data from South Africa shows a small uptick in ICU patients and deaths over the last three days, both metrics remain low compared to previous waves, especially relative to case numbers. Critical cases in London - which as noted above is at the forefront of the Omicron wave in the Northern Hemisphere with record infection numbers - also have had an uptick, but remain extremely low. And while it's still early days, this data remains crucial in the upcoming period and absent a surge in deaths, should lead to broad relief rally in coming weeks.

Still, before giving the all clear, Yared cautions that there are warnings that the South African experience with Omicron may not be directly comparable to other countries (if only because developed countries have a far more elderly people than South Africa). As a result, DB is also tracking the evolution in London as a leading indicator for the Northern hemisphere. Here there is more good news as the number of ICU patients on mechanical ventilators (MV) remains low.

This is the bank's preferred metric as it is not distorted by patients being admitted to hospitals/dying with rather than because of covid. That said, given the historical lag between cases and MV, it's still too early to draw definite conclusions on this.

In short, absent a dramatic (and unlikely) surge in morality late into the Omicron spread, the variant indeed remains "extremely mild" compared to previous waves, and more importantly, despite its far faster spread, it is now peaking across most geographic regions. Perhaps Kolanovic will be right this time with his recent prediction (which echoed what we said one month ago), in that Omicron will actually turn out to be positive for risk and result in an "end of the covid Pandemic."